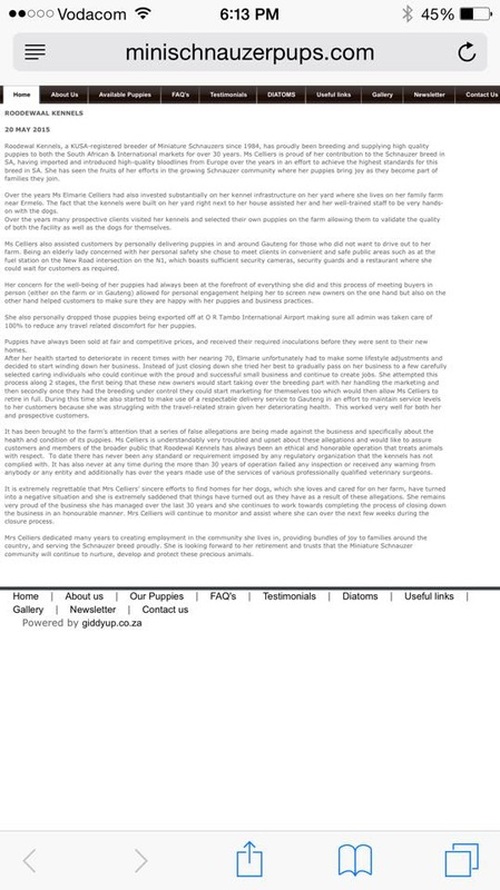 RESCUE PUPPY FARM PROJECT UPDATE: The SADDEST thing about the  Schnauzer Friends Rescue project is that the owner of ROODEWAL Kennels continued to say that the allegations were false and that they had  done nothing wrong. According to them they want "the miniature schnauzer community to continue to nurture, develop and protect these precious creatures".

Oh dear imagine the look  on Elmarie Cilliers face when the SPCA obtained a warrant and entered the Roodewal Farm on the 5th June 2015.  76 schnauzers were removed under the animal protection act.  Another  192 were volantarily handed over by some of her contract breeders.  SOURCE: http://www.sandtonspca.org.za/rescued-the-dark-side-of-breeding/  "Our colleagues from Highveld Ridge SPCA recently seized 76 Schnauzers from Roodewal Kennels in Ermelo after a raid on the breeders premises. The dogs were found in appalling conditions, lived in wire cages and slept in rat infested holding areas. The kennels were found to be filthy and some of the dogs were sleeping in their own faeces. While being kept as breeding machines the dogs were found to have many ailments and illnesses due to the lack of care, typical of a puppy mill."

This leaves the SPCA, our rescue team, other volunteers, our community, adopters, fostererers, vets and behaviorists to pick up the pieces! You only have to look at the health and mental condition of these breeding dogs that were feeding the ROODEWAL Kennel to realize that something was NOT adding up!

Below is the story of just one of the adult Schnauzer's we have recently rehomed.  The Schnauzer Friends South Africa community is through donations and adoption fees funding all the sterilizations, travel, expenses, medical care as we try and rehome about these Schnauzer's. They deserve better than to be locked in pens outside in the cold and the rain, day in and day out with little human companionship!

Schnauzer Miss Pepper Potts Bos was adopted as part of our ex Roodewal contract breeder Schnauzer Friends Puppy Farm Rescue Project, and she is slowly settling into her new life as a pet.

"I have recently adopted Miss Pepper-Potts an ex-Roodewaal breeding mommy mini Schnauzer, who is just a mere 5years, 7months old.
They are known as PUPPY-MILL DOGS.
Do you know what it is like to try rehabilitate a dog that has been used by a greedy breeder. For the sake of money?
To stare into her little eyes that have no sparkle,
For her to stare into space for hours,
For her to scamper away when humans approach ,
For her not to know what a loving touch feels like,
For her to lie in a pen in the cold and wet,
Just to produce litter., after litter,
She does not know how to play,
Her legs are weak from being caged up with very little time to run around,
She cowers and shakes when we come near her,
Her teeth are black, full of calcium build up, and she battles to chew.
She is unsure, very afraid, suffers from anxiety, bad nutrition, bad breath , "dead eyes" and does not know how to jump
She is my PuppyMill rescue Schnauzer, a breeding mommy who for the first 5 years of her life had to live in a stinky faeces and urine filled pen, to produce litter after litter just to make someone a lot of money.
Some of these dogs are so messed up, they simply do not know how to be dogs!!"

PLEASE DO NOT SUPPORT PUPPY-FARMS. 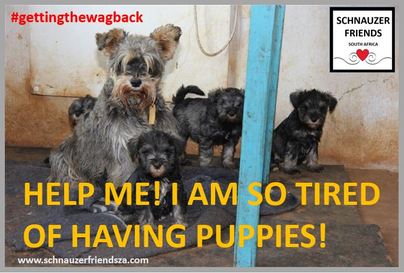 Also read about Lilly's journey. She is miss Pepper Potts sister and is being fostered by one of our rescue team. Be careful it will break your heart!
http://www.schnauzerfriendsza.com/blog-fostering-lilly.html
‪#‎gettingthewagback‬

RESCUE PUPPY FARM PROJECT UPDATE: The SADDEST thing about our current Schnauzer Friends Rescue project is that the owner...