Adoption Story:  Peppa - A Team Effort to Get a Dogs Wag Back 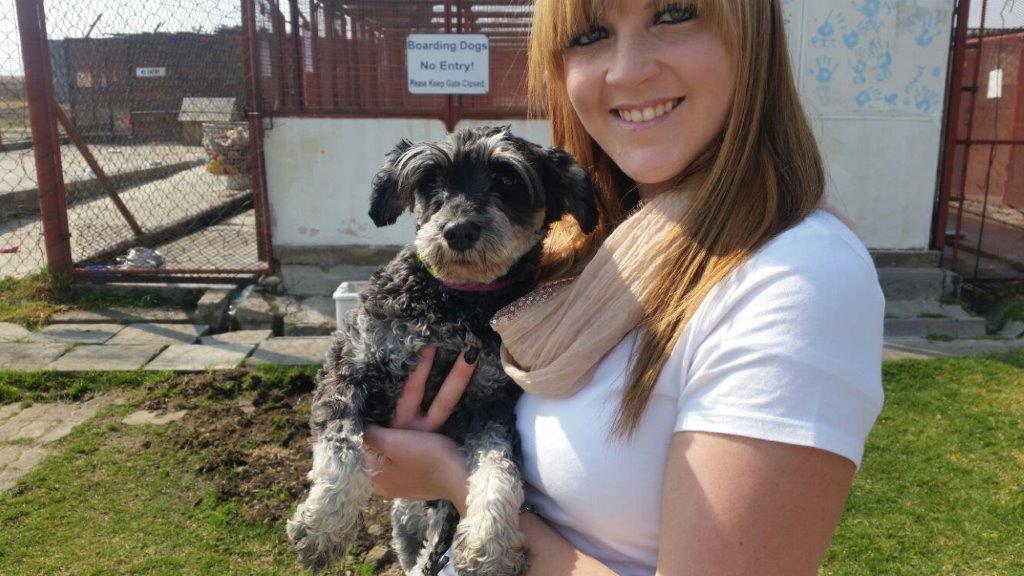 I adopted Peppa on 22 August 2015 from Highveld Ridge SPCA near Secunda. I had heard from a work colleague that a puppy mill had been raided and hundreds of schnauzers needed to be rehomed. Once at the SPCA I tried to take Peppa for a walk around the yard. She was incredibly scared and only wanted to hide under a trailer. I fell in love with her immediately and was lucky enough to be able to adopt her.
​
However, once home she was terrified. Only hiding behind bushes in the garden, staring at the wall and into corners with her head hung low and running away when anyone approached her.  She refused to eat and was terrified of water. I struggled for months with her and she made little improvement.

I saw a post on Schnauzer Friends South Africa Facebook page, about the Canine Zone magazine article that Scotty Valadao had written about Pippa, another category 3 schnauzer rescued from Roodewal Puppy Mill. I went off and bought the magazine and tried some of the techniques mentioned in the article. This seemed to help a bit but rate improvement was painstakingly slow and I began to feel very despondent about whether Peppa would ever be a happy, normal dog.

January 2016, while picnicking in Delta Park, I bumped into Deborah from Schnauzer Friends South Africa. I told Deborah about how I had adopted Peppa from Highveld Ridge SPCA following the raid and about my struggles to get her to be less scared of humans. Deborah told me about a special rehabilitation program Schnauzer Friends and Scotty Valadao had developed for the Roodewal rescue schnauzers. She was kind enough to arrange for Peppa and I to be included into the program.
Peppa and I attended two very informative sessions with Scotty, during which Scotty gave me many tools to teach Peppa to trust me and humans, as well as lots of literature for me to read. Two of the tools I learnt were to hand feed Peppa her supper and breakfast and ways in which to hold my body and head when greeting and interacting with her which would be less threatening to her. She also introduced me to Avalon spray and some all-important T-touch techniques. Armed with my newly learned skills and information we went off to put them into practice.

The improvement in Peppa has been dramatic. I can't believe she is the same scared little thing that I took home on the 22nd of August. She is so confident now, that she comes into the house and sleeps in my bedroom by choice (she is quite a bed bug I might add, refusing to get out of bed in the mornings). When I have guests she walks around greeting everyone and interacting, she's gone from being terrified of water to absolutely loving to swim and is the first one in any river or dam. Her trust in humans has grown tremendously.
Unfortunately, we do still have the odd dark days, but they are becoming fewer and fewer and the characteristic cheekiness of a schnauzer is starting to emerge. Nothing makes me happier than to see her happy and I would like to sincerely thank Deborah, Scotty and Schnauzer Friends for this fantastic opportunity which has helped my little Peppa so so much!!!  PS: I have included some before and after pictures of Peppa. Even her eyes look alive and happy now, where's before they were dead and just stared past you.

To read the full story click here:  http://www.schnauzerfriendsza.com/roodewal-exposure.html
​
Our rescue project shows that good can overcome evil. A community can stand together and say no. Animal abuse must not be tolerated! Do your homework. You may have brought a cute puppy, but if the parents are suffering in horrible conditions, you are contributing to this evil trade. Do not support puppy farmers and backyard breeders.  Even better adopt, don’t shop.