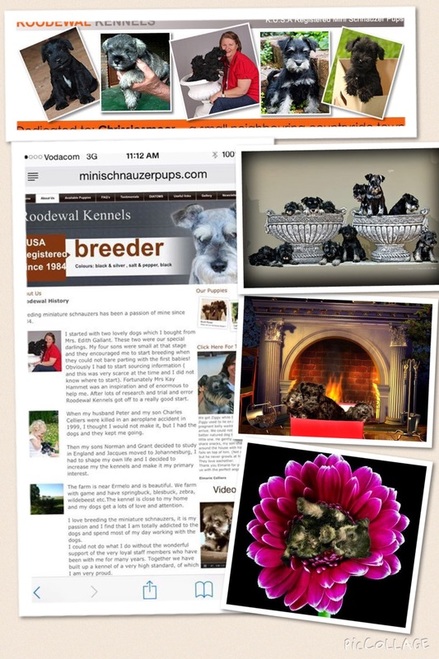 Sadly puppy farms are a reality in South Africa.

Roodewal Kennels advertised in most of the animal magazines, on websites, Facebook etc. They are KUSA registered. They advertised with the slogan "Breeders of Top Quality Miniature Schnauzers" and on the website the owner Elmarie Cilliers said "Breeding miniature schnauzers has been a passion of mine since 1984".

Oh dear ! Someone was telling porkies!!!!

How it got closed down?

Prior to starting Schnauzer Friends South Africa there was no PLATFORM for schnauzer owners/lovers to chat and share information.  We have now provided it. One of the repercussions of this platform is that people now see Schnauzer Friends as the Schnauzer Go "Ombudsmun". Disgruntled schnauzer puppy and dog owners regularly contact us to to complain and Roodewal Kennels was about 98% of all complaints we received.

The story was consistent - Roodewal kennel delivered sick puppies that died after a few days,  and then Elmarie Cilliers (the owner)  offered to replace the puppy or pay towards the medical bills. Often the dogs get sick with genetic diseases when they are older. People fell for the Kennels glossy ads and trusting words splattered across magazines, the kennel website all sorts of forums in South Africa and internationally. And yes, this kennel was  KUSA registered! The reality was  a different story. Please be CAREFUL!

Please read some of the Roodewal Kennel feedback  under "Horror Stories" at the bottom of this page. 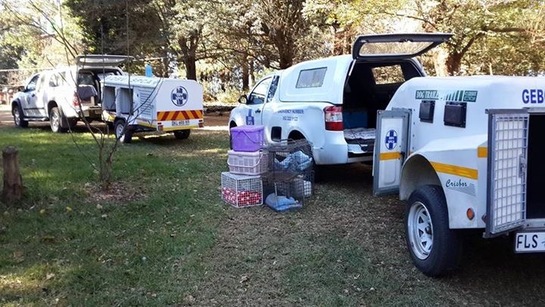 Well on the 5th June 2015,  the SPCA and Ermelo SAPS got a warrant and entered the Roodewal Farm. More than 70 schnauzers were confiscated off  under the animal protection act. According to the SPCA article below they were living in horrific conditions and needed veterinary care!

Here is a link to an article about what the SPCA found at the Roodewal Farm.  Rescued: The dark side of breeding.  http://www.sandtonspca.org.za/rescued-the-dark-side-of-breeding/

Here is an extract from the article.....
"Our colleagues from Highveld Ridge SPCA recently seized 76 Schnauzers from Roodewal Kennels in Ermelo after a raid on the breeders premises. The dogs were found in appalling conditions, lived in wire cages and slept in rat infested holding areas. The kennels were found to be filthy and some of the dogs were sleeping in their own faeces. While being kept as breeding machines the dogs were found to have many ailments and illnesses due to the lack of care, typical of a puppy mill. Schnauzer friends South Africa assisted the SPCA in identifying this horrific situation. The reality is that every year, retail pet stores across South Africa sell thousands of dogs, while millions of dogs enter shelters across South Africa." 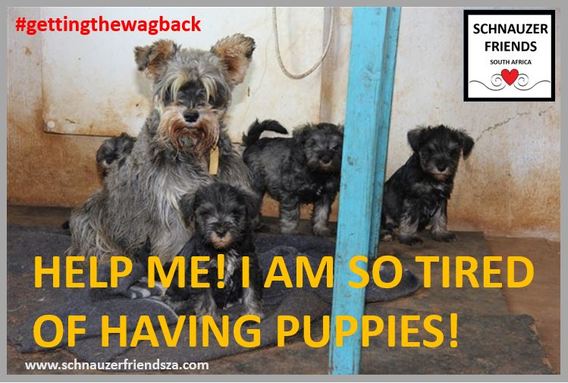 The Roodewal Kennel had its own breeding dogs in cages and still contracted out more breeding to other other farms to supply her miniature schnauzer puppies. (We have a copy of a signed breeding contract.)

One of the Roodewal contract breeders says that Elmarie told them proudly a few times that she had over 40 contract breeders working for her (and is prepared to say this in court).  Elmarie brought the puppies from them at around 7 weeks of age for between R1500 and R2500 and sold them under the Roodewal banner! We have located 5 of these contract breeders and between them they have 220 dogs - many pregnant. We are finding more and more as they realize that they have all these mouths to feed and no income as the marketing leg has disappeared. They were not allowed to sell the puppies themselves.

Just or fun have a look at this marketing video. As you can see there are no adult dogs shown because now we all know where they were .....
http://youtu.be/zzZnjP45R_4 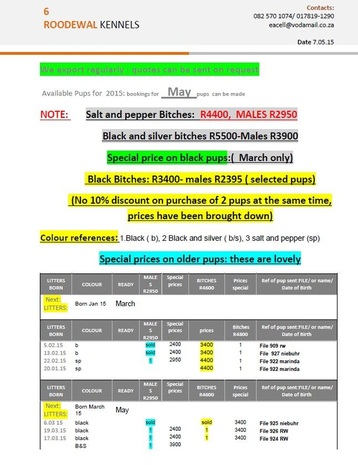 Roodewal Kennel was a puppy mill empire. Pity they spent so much on marketing and so little on the care of the breeding dogs.

Do your homework! This is not illegal - just ethically wrong and that is why a lot of the puppies were sick. The only way to stop it is not to support them! This is money making greed - no regards for the little schnauzers or for the people who buy them.Roodewal Newsletter ......

Also here is an extract from the May 2015 Roodewal Kennel Newsletter - you can just feel the love ....

There are "specials" on blacks pups, discounts if you buy more than one puppy etc.  On page 6 you can even see the list of the puppy litters  arriving and the contract breeder code and file name!

For your reading pleasure you can download the entire news letter here... 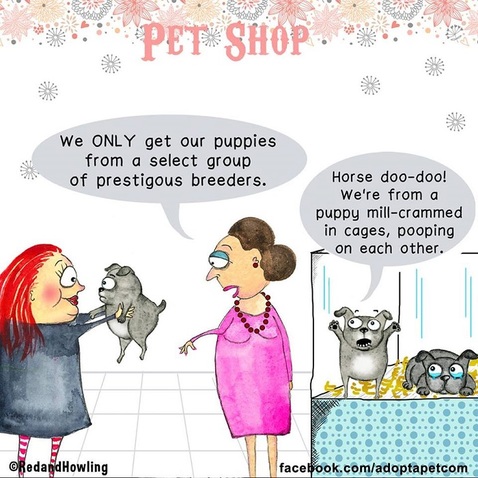 Here are some comments from members of our schnauzer community posted to Facebook..... 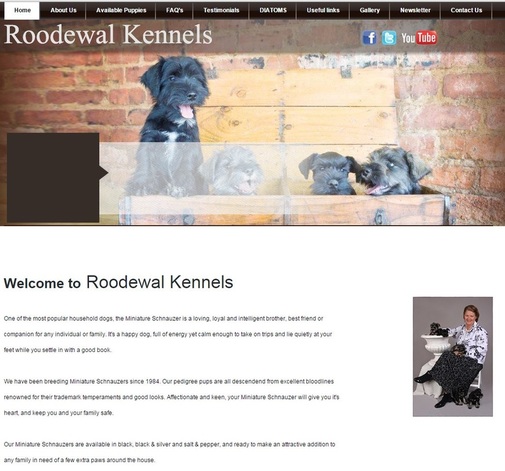 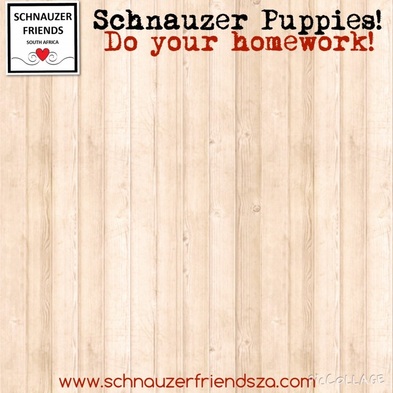 Please be CAREFUL! Do NOT become one of these horror stories!  PLEASE  be very careful of ads on gumtree, OLX etc.

INFO: Recognised schnauzer breeders normally have a waiting list for puppies. The reason for this is that they provide quality puppies, who are brought up in a well researched home environment with the best care and nutrition. The dogs and litters are loved and cared for, so the chances of buying a sociable, loving pup is very good. Do your homework!

Click on the comments number on the below Facebook post to read some more comments about peoples experiences.  The Roodewal Kennel mentioned in the comments was the largest schnauzer breeder in South Africa and had amazing glossy ads and promises.

The reality was a different story.

INFO: SAD: I have people reporting the same schnauzer puppy GREEDER over and over to Schnauzer Friends. Today I had two...

and an update and still more comments about sick puppies ....

UPDATE: ROODEWAL: We are the doggies voice! Some interesting developments behind the scenes with the "Roodewal" puppy...

Posted by Schnauzer Friends - South Africa on Monday, May 4, 2015

RESCUE: ROODEWAL UPDATE. THANKS to everyone who has spoken up and assisted in getting the Roodewal "REAL STORY" out in...

Posted by Schnauzer Friends - South Africa on Thursday, May 7, 2015

An open letter to the contract breeders ....

RESCUE: An open letter to a Roodewal contract breeder who is asking Schnauzer Friends what happens to his business and...

Posted by Schnauzer Friends - South Africa on Thursday, May 7, 2015

RESCUE: JOHANNESBURG. Great News! Schnauzer Friends has had over 50 of a Roodewal ex-contract breeder schnauzers...

11 May - A letter and response about seeing the puppies parents

RESCUE: ROODEWAL Puppy Farm: An answer to a Roodewal/Elmarie supporter and fan......"Hi Libby. One of the aims of...

Posted by Schnauzer Friends - South Africa on Thursday, May 21, 2015

RESCUE: DISAPPOINTED! Schnauzer Friends is getting many messages from our community who are sad and disgusted that...

RESCUE: High five from puppy Thomas! A big THANK YOU to everyone who has donated, adopted, helped, offered to help,...

Posted by Schnauzer Friends - South Africa on Thursday, May 21, 2015

Please go to http://www.schnauzerfriendsza.com/project-plan--status.html for more info on the current status of the project.

Well on the 5th June 2015,  the SPCA and Ermelo SAPS got a warrant and entered the Roodewal Farm. More than 70 schnauzers were confiscated from the farm under the animal protection act. According to the SPCA they were living in horrific conditions and needed veterinary care!   They were surrendered to the SPCA a few days later.....