​Roodewal Kennels was  exposed as a large miniature schnauzer puppy farm empire.  With a kingpin at the top doing the marketing with many other breeders contracted to supply miniature schnauzer puppies into the network.  It has been shut down.  Between Schnauzer Friends South Africa and the SPCA's  320 breeding ex Roodewal Kennel breeding stock schnauzers were rescued, sterilized, medically treated and rehomed into loving homes. These dogs were kept in horrific conditions outside with little human contact, while locked into the breeding cycle, without a voice of their own.  Many were emotionally broken and need extensive rehabilitation.  They now have a chance to be loved pets! ​ 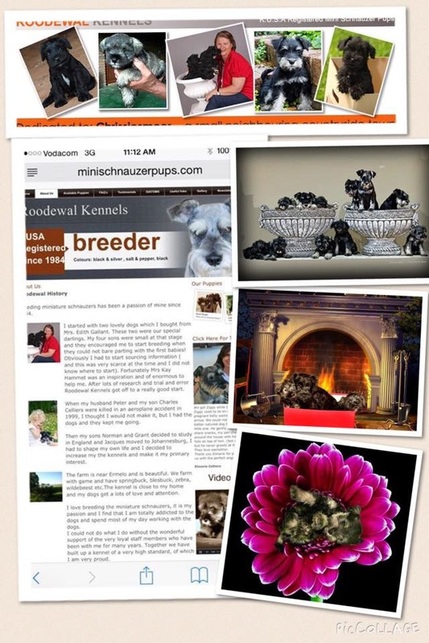 Enough is Enough! Have your say!

Roodewal Kennels advertised in most of the animal magazines, on websites, Facebook etc. They are KUSA registered. They advertised with the slogan "Breeders of Top Quality Miniature Schnauzers" and on the website the owner Elmarie Cilliers said "Breeding miniature schnauzers has been a passion of mine since 1984".

Schnauzer Friends South Africa received many complaints regarding Elmarie Cilliers and Roodewal Kennels over a period of time. We tried to engage with Elmarie Celliers and shared many of the community’s complaints and concerns with her. We were threatened with legal action and otherwise ignored.  The story was consistent - the puppies were sick, they died and then people were offered replacements or a portion towards the medical bills. Some of the older dogs were getting sick with genetic diseases. People fell for the breeder glossy ads and trusting words splattered across all sorts of forums in South Africa.

In April 2015 Schnauzer Friends was contacted by one of her many Roodewal contract breeders for help, and the whole horrible Roodewal Kennel story started to unravel …….. 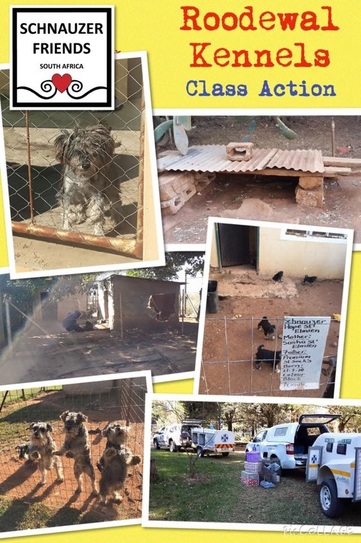 Many people have been following the Schnauzer Friends South Africa Puppy Farm Rescue Project over the last few months.  As a community of schnauzer lovers, we have been rehoming 76 ex Roodewal Kennel breeding dogs and 50 puppies into loving homes after they were surrendered to us by one of the Roodewal contract breeders. Many of these adult dogs have both physical and behaviour issues, as a result of being locked outside in the cold and rain in breeding pens with little human companionship. Most of the girls are weak after not being allowed to rest between litters…… 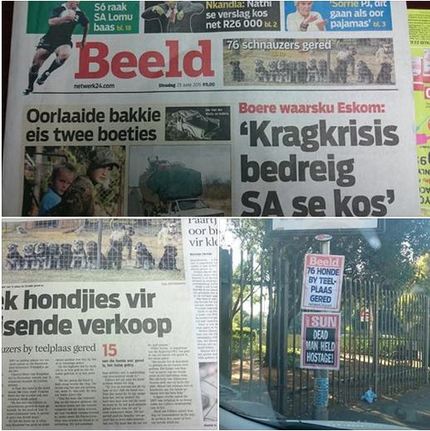 What was behind the glossy adverts and marketing....

Behind the glossy adverts and KUSA registration was a schnauzer puppy farm empire, with Elmarie Celliers at the head with many contract breeders feeding puppies into the network to be sold under the Roodewal banner. Many of the vaccinations were done by Elmarie herself.

Our fabulous Schnauzer Friends South Africa community and rescue team has stood together and provided the time and money to look after, sterilize, get vet care etc. for the 76 adult schnauzers and 50 puppies whist we found them forever homes where they could sleep inside and be pets.  Many of our wonderful community have opened their hearts and homes to these rescue schnauzers. Our rescue team are all volunteers with full time day jobs. 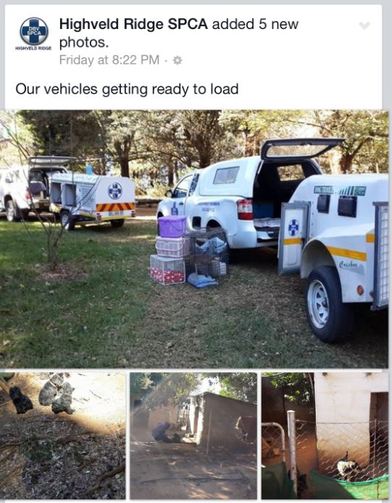 The SPCA and SAPS and Prosecution

We lodged a complaint and the SAPS and the SPCA got a warrant and seized another 76 miniature schnauzers off the Roodewal Farm on the 5th June 2015.  According to the SPCA “The dogs were found in appalling conditions, lived in wire cages and slept in rat infested holding areas. The kennels were found to be filthy and some of the dogs were sleeping in their own faeces. While being kept as breeding machines the dogs were found to have many ailments and illnesses due to the lack of care, typical of a puppy mill.“

Another 66 Roodewal Kennel contract breeder miniature schnauzers were surrendered to the SPCA after the raid.

This means that there are over 320 Roodewal Kennel breeding miniature schnauzers being rehomed as a result of our community’s pressure and exposure of the puppy farm.

Many people in our Schnauzer Friends South Africa Community were very disappointed in Elmarie Celliers half hearted apology on the 3rd July, where she stated that she was not on the farm when the SPCA and SAPS arrived and blamed the condition of the dogs on her staff.  Elmarie has disappeared off social media and nobody can get hold of her on the phone, email etc.

The SPCA have stated that they do not have enough evidence to prosecute Elmarie at this stage. 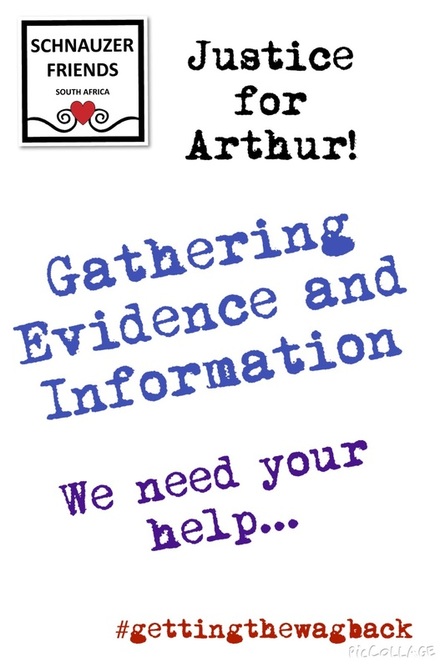 As the Schnauzer Community we need to provide the evidence….

The Schnauzer Friends community can make this happen. This is not about excuses for one day when Elmarie was caught off guard by the SPCA, but about wanting justice for all the miniature schnauzers and schnauzer lovers who have suffered as a result of Elmarie Celliers’ 30 years of breeding.

What we need from you …

Based on the comments over the last few months there are many of our community and their families who have been affected, and this has been over a long period of time.

Together we can put this puzzle together and when we have enough evidence and information we can then take it to the appropriate authorities for action e.g. 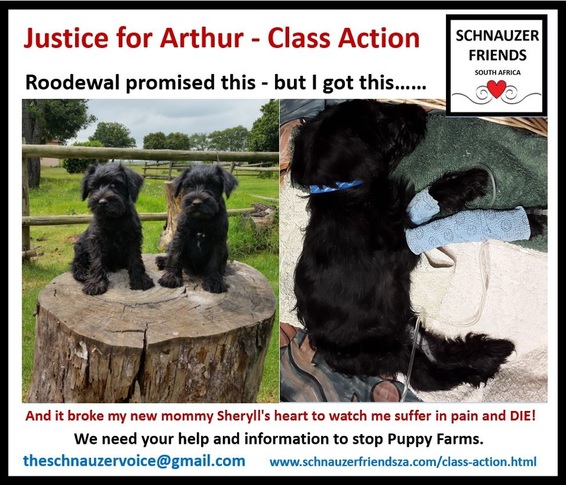 Schnauzer mom Sheryll Steyn fell for the glossy Roodewal marketing and brought a miniature schnauzer puppy called King St. England from Roodewal Kennels in February 2015. She renamed him Arthur but unfortunately Arthur died a slow painful death a few days after she received him from Roodewal Kennels. When Sheryll contacted Elmarie Celliers, she was offered a replacement puppy as if Arthur was just a pair of shoes! Sheryll was heartbroken. Sheryll is sharing her story in the hope that her little Roodewal puppy Arthur did not die in pain and in vain. She is sharing this in the hope that many that went through the same, (or similar), traumatic experience, will stand with her, in taking further action against the greedy breeder, Elmarie Celliers.

The South African Veterinary Council is prepared to log a criminal case against Elmarie, based on Sheryll's affidavit. This is already in progress.  There are at least three acts in the Veterinary and Medicine Act, that Elmarie can be held accountable for and we believe this will be common for other people who received puppies from Roodewal Kennel. To strengthen Sheryll’s case, we are looking for people that are willing to draw up an affidavit and stand in unison, against her.

Sheryll says ‘I would like to expose this breeder nationally. She has knowingly sold sick puppies and ran a puppy mill with contract breeders, all while doing nothing to ensure the health and wellbeing of her dogs. I want this type of breeding stopped, exposed and made an example of, to all those breeders that just don't give a damn.”