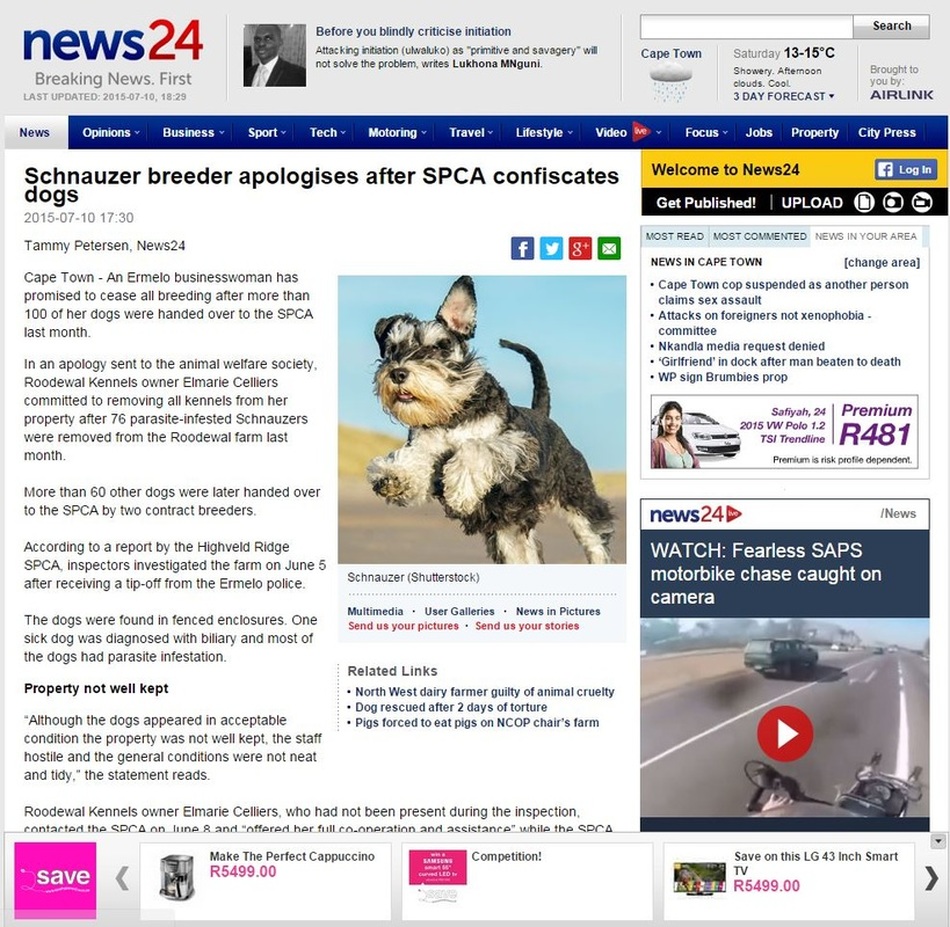 Cape Town - An Ermelo businesswoman has promised to cease all breeding after more than 100 of her dogs were handed over to the SPCA last month.  In an apology sent to the animal welfare society, Roodewal Kennels owner Elmarie Celliers committed to removing all kennels from her property after 76 parasite-infested Schnauzers were removed from the Roodewal farm last month.

More than 60 other dogs were later handed over to the SPCA by two contract breeders. According to a report by the Highveld Ridge SPCA, inspectors investigated the farm on June 5 after receiving a tip-off from the Ermelo police.  The dogs were found in fenced enclosures. One sick dog was diagnosed with biliary and most of the dogs had parasite infestation. 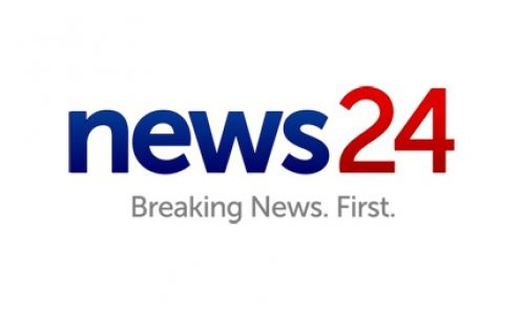 “Although the dogs appeared in acceptable condition the property was not well kept, the staff hostile and the general conditions were not neat and tidy,” the statement reads.

Roodewal Kennels owner Elmarie Celliers, who had not been present during the inspection, contacted the SPCA on June 8 and “offered her full co-operation and assistance” while the SPCA investigation continued.

A donation was made to the SPCA for the immediate care of the dogs and Celliers offered to pay for any further veterinary care for the animals.

She was given seven days to contact the SPCA to make arrangements, but Celliers “signed over and gave up all interest in the dogs within 48 hours”.

She has, however, been paying for the day to day care of the dogs while they await adoption.

Towards the end of June, two contract breeders for Celliers signed over a further 66 dogs to the SPCA.

According to the Sandton SPCA’s Candice Scorer, almost all of the 20 dogs they took to their premises to assist the Highveld Ridge team have already been adopted.

“The dogs were found in appalling conditions, lived in wire cages and slept in rat infested holding areas,” she said.

'Dogs were sleeping in their own faeces'

Scorer pointed out that every year, retail pet stores sell thousands of dogs, while millions of dogs enter shelters across South Africa.

In an apology sent to the SPCA, Celliers stated she had since ceased all dog breeding at Roodewal Kennels.

“I will not conduct, run, manage, partake or be involved, directly or indirectly, in dog breeding in any way whatsoever going forward,” she wrote.

“I will demolish all existing kennels on my property within a reasonable time period.

“I will further ensure that my employees undergo training with the assistance of the SPCA so as to ensure that they appreciate that what they did was wrong.”

Celliers wrote that she apologised to all “who may have suffered any prejudice or harm as a result of the way in which I conducted my dog business”.

“I certainly did not spend 30 years of my life dedicated to the miniature schnauzer breed in order to intentionally harm or hurt anyone or any animal. If this indeed happened, I apologise unconditionally.”

News24 attempted to reach Celliers, but no response was received.

Marilize Nel of the Kennel Union of Southern Africa (Kusa) said Celliers was not an accredited breeder.

“Mrs Celliers is a Kusa member and her dogs are Kusa registered, but as a registry for purebred dogs, the Kennel Union of Southern Africa does not have any jurisdiction to enter properties, to inspect facilities, or to remove animals,” she said.

“Kusa continuously appeals to members of the public to assist in curbing unacceptable breeding conditions by always visiting a breeder’s premises prior to purchasing a puppy.”

Nel said the union encourages the responsible breeding of healthy, well-adjusted puppies and promotes ethical breeding practices by its members, although Kusa is not an animal welfare organisation.

“The NSPCA is empowered under the Animal Protection Act to perform such duties, and when claims of animal neglect or animal cruelty are brought to Kusa’s attention, it actively encourages the reporting of such practices to the NSPCA. The confiscation of [76] dogs from a property is alarming and KUSA supports the NSPCA in the action that was taken.”

The Highveld Ridge SPCA confirmed they had not been able to gather enough evidence to explore criminal charges against Celliers.


To read our communities comments on the above article click on the comments below ...

RESCUE: Love it! Thanks News24! The news is spreading re Roodewal Kennel. Be careful of puppy farmers - they spend more...